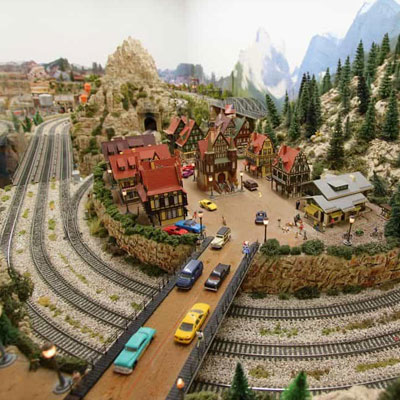 Model railroad benchwork is a promise of dreams to come. Instead of seeing lumber and bare plywood, modelers gaze over new benchwork and see the valleys and hills of their favorite places. Without so much as a foot of track down, they can imagine trains rolling across the landscape, the activity in a large yard and the fun of mailing up the morning passenger train. Nothing mars the images in their mind. There are no derailments, switch points never stick, and the right locomotives, detail parts and decals are always available. Even with a cautionary note–don’t let things stall here–the benchwork stage is a wonderful time in a layouts history.

However, getting the benchwork done, done well, and done quickly can be a stumbling block for layout builders. Each of us likely shares some of the same benchwork experiences: 1″ X 4″s that were straight when picked through the stacks but turn into warped airplane propellers on the way home; spending all afternoon and evening cutting long wood into short wood, then discovering that there isn’t a drop of glue or a flathead wood screw in the house; the neighbor’s reaction to the scream of your radial power saw around midnight, when only one or two more pieces are needed to finish a section; the world’s biggest and best collection of sawdust at a time in the hobby’s history when sawdust isn’t used for grass any more.

We’ve all been there, and this ignores the fact that you usually give blood at least once or twice per benchwork-building session. Model railroading sure is fun.

There is an alternative, one that meets our needs better than one might first imagine: the prefabricated benchwork components marketed under the brand name MIANNE, from Foley Woodworking.

The MIANNE benchwork is a completely different approach to the subject. It uses the same construction methods as cabinets and furniture, which is no surprise since it was developed by a cabinet maker. Its unique aspects include pre-fabricated I-beams for all horizontal members, legs with an octagonal shapes at their tops to permit either 90 or 45-degree corners, and the use of cabinet/furniture type cam locks and pins for assembly.

Let’s start with the I-beams. They are made of end blocks which are pre-drilled for the steel pins, cam dowels and cast metal cam locks that tie the pieces together, and square “flange” pieces on each side of the hardboard web. The wood appears to be tulip or poplar and is light, straight-grained and strong; this is the same type of wood that is often used for furniture and cabinet framing. The cutting and fitting are neatly done, with no sloppy glue joints or loose pieces. The edges of the pieces are also splinter-free.

The I-beams come in lengths just under two and four feet long to provide even two and four-foot sections when assembled to the legs. A top and bottom I-beam is to be used on most leg sections, and longitudinal beams (four-footers) are to be used alone. Splicing blocks are available in case one needs to tie I-beams together for some reason or make up a custom length. All holes are drilled with a jog and are located accurately for their mating parts. The I-beams work out to be about 3/4″ thick by around 4″ high. Obviously special situations can be worked out with a drill and a couple of bits.

As mentioned, the legs (2″x2″ poplar) have an octagonal top to allow I-beams to attach in either a 90 or 45-degree corner. Pairs of chrome-plated steel stabilizer pins are inserted into pre-drilled holes adjacent to a screw in “cam dowel”. When the pieces are pressed together all one needs is a standard screwdriver to turn the cam in the I-beam and lock the parts. That’s all there is to it: no mess, no cutting, no drilling or sawdust. This can be done in the living room on a carpet, and a basement can be filled in an evening.

I assembled three different benchwork sections, including two with four-foot I-beams, then tried to deflect the benchwork down by pushing hard on it. The assembly in incredibly strong. A “sag test” was done by placing a six-inch piece of 125-lb. rail across the I-beam. The board spanning them sagged. The I-beams did not.

The photos show one stand-alone section and the pin details. The pins are chrome plated, so they will not rust; this also makes them easier to insert (or remove). The cam locks are cast metal and work by biting into the cam dowels. The resulting connections are completely secure, but I suspect one could actually take the benchwork apart, put it in a moving van and cart it across country flat. The savings in time and money would get the next railroad started fast.

Although the sections may be assembled in nearly any arrangement ( a four-footer can be lifted with one hand, by the way), they are primarily based on two-by-two, two-by-four, and three-by-six multiples. If one is seeking to build a modular or portable layout the system is flexible enough to work something suitable out. Model railroaders tend to be a creative bunch.

MIANNE has a price list and information sheet avalable for $1.00, and it’s worth getting. They offer benchwork “packages” in addition to individual sections and parts. Some of the packages will fill a room. As a sample, benchwork for a two-foot wide by twelve foot long railroad runs about $250.00, plus shipping. With so much work done in advance and the high quality of of the parts, there can be real advatages in using this system, rather than making a trip to the lumber yard. Lumber isn’t cheap.

Note that there is no reason why one must stick to a two-foot width for a railroad, even if the longitudinal members of the benchwork under it are two feet apart. Cross-joists may be used to support wider scenery. Remember, scenery methods, sub-roadbed and track are all separate from the benchwork. I would tend to favor some sort of rigid foam scenery in keeping with the neat clean aspects of this benchwork. The standard legs set the tops of the I-beams at 40″, which is a nice height to start from.

If benchwork is where model railroad dreams start, the MIANNE benchwork sections can help them be good. I will be using the sections that I have for a layout project; it is already off to a good start.