Benchwork Can Be Fun, O-Guage Railroading 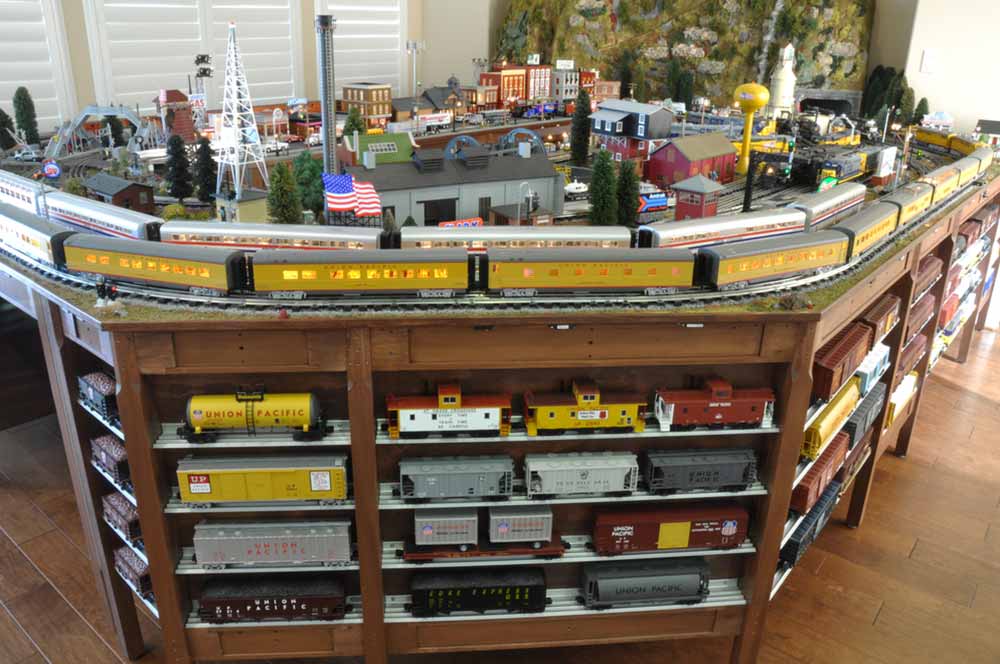 Benchwork Can Be Fun
By: Barry Lewis

For most of us, building benchwork is a necessary evil, something that has to be done before we get to the real fun of building a layout. Sometimes the benchwork is so daunting we never get to the layout part; at the other end, moving to a new house often means a layout is destroyed in the process of getting the benchwork out of the old house. As Fred Doyle noted in his article on custom layouts Run 208, “You could never figure out how to get my layout apart. What would happen to it if I moved?”

There are two basic elements to the MIanne system: legs and girders. The 1-3/4″ square legs are made of kiln-dried poplar, a furniture-grade hardwood, and have an octagonal top that allows girders to be attached at a 90 or 45-degree angles. Legs are normally 40″ tall but can be supplied at any height the purchaser desires. Legs also have a leveling feet to adjust for uneven floors. Girders are constructed of hardwood sides and ends with an interior web of MDF, a molded wood product. The sides and ends are glued to the web, and the ends are also stapled to it. The end result is a framework that is surprisingly lightweight but – when a plywood top is applied – rigid and strong enough to support the weight of an average adult working on the layout. The fact is that the heavy lumber used by many home layout buildings is massive overkill for most model railroads. The choice of materials in the Mianne (pronounced “me-ah-nee” and names after Tim’s three children) system is designed to provide lightweight and rigidity as well as seasonal stability across the range of temperatures found in many basements. Mianne benchwork will experience less shrinkage and expansion that will benchwork built from cheap-grades of softwood because the MIanne system is engineered so all pieces experience “seasonal movement” at the same rate. In layman’s terms, you’re less likely to have a track or scenery shift if your layout goes through temperature extremes.
Legs and girders are joined to each other with furniture-syle quick-lock cam fasteners. Using a Phillips screwdriver, the purchaser screws a cam dowel into a predrilled hole in the leg. Two chrome stabilizers are inserted into the pre-drilled holes above and below the dowel to give the joint stability.

The cam lock is then inserted into it’s hole in the girder. Next, the cam dowel is inserted into the cam lick, and the girder and leg are locked together by turning the cam lock a half-turn with a screwdriver. This is much easier to do that to describe! Turning the cam lock snugs the girder and leg tightly together, and the assembly will stay put as long as the layout is up. I assembled out test unit in an unheated garage and left it through several months of hot and cold weather, and I experienced no loosening of the joints.

Mianne legs and girders are assembled into a box either 24″x24″ or 24″x30″, and these boxes form the basic grid of layout construction. While you can design your own benchwork using the system, Tim will custom-design benchwork to fit your proposed layout at no additional cost – including custom sized girder pieces if necessary. The Mianne catalog and website also show a number of sample layouts with prices. Because the tops of the legs are octagonal, the Mianne system allows you to attach girders to make 90-degree or 45 degree angle corner pieces such as those on our sample benchwork. As mentioned earlier, Tim recommends that a plywood top (1/2″ or 3/4″) be attached to the benchwork and used as a foundation for the layout. Scenery riders for deviated track, etc., are then built on the plywood. Mianne does not supply plywood, but the benchwork kits do include plastic angle brackets for top attachment. The angle brackets are screwed into the legs and then into the plywood top from below. This arrangement allows you to easily separate the top from the benchwork in the event of a move or layout change. Because the benchwork is screwed together you can simply open the cam locks at any time to take apart, change or add to it.

Tim sent us a 4’x8′ L-shaped section for testing. The pieces were all nicely constructed and splinter free, and the finish benchwork, in fact, was really handsome to look at! Each Mianne ordered is supplied with a color-coded custom assembly diagram and well written instructions. We had our sample assembled in under 2 1/2 hours, including pauses to write review notes. You could easily assemble a sizeable layout in one long day.
Everything on our sample fit as it should, and the construction process, was actually fun. Leveling bolts in each leg made it easy to get a level tabletop on the uneven garage floor where we did our testing. Once assembled, the system was quite stable. Adding a plywood top, however adds significantly to it’s strength. Once of the legs on our sample did have a hairline crack in the wood. While Time assured us that would not be a problem over time, he will replace any piece that a customer is not satisfied with. A number of threads on the OGR On-line forum (www.oguagerr.com) have attested to the fine customer service Tim is known for and long term users seem very satisfied with the MIanne system. At least one forumite has a multi-level layout for which Tim custom designed the benchwork. Tim also told us he is working on a counter balanced vertical lift-out section that will allow easy access to the center in around-the-room layout configurations. While Mianne kits are not inexpensive, I would say they are a great value for the money. Consider that a kit for a small layout (for example 4′ x 12′) will set you back about the same as a good sound-equipped diesel, and a pretty large layout can be built for about the price of a die-cast mainline steamer. Then consider the cost of lumber and the time you’re not spending looking for straight pieces, cutting them, or cutting yourself on a power tool, in that light, I’d say it makes sense for many of us to have Mianne do the hard part of benchwork construction, and save just the fun part for ourselves.